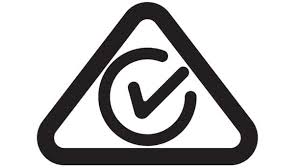 Under the previous regulations ‘Prescribed Electrical Equipment’ had to carry both a Unique Electrical Safety Approval Number and a C-Tick.

The C-Tick denoted that the power supply in question complied with Australia’s EMC (Electromagnetic Compatibility) regulations. These regulations are laid out by the Australian Communications and Media Authority (ACMA), a Federal Government agency.

For example, a New South Wales Electrical Safety approval number would have most likely take the form of NSW012345. The first 3 letters denote the issuing authority.

The new single compliance mark is called the Regulatory Compliance Mark, or RCM mark. It replaces both the C-Tick and Unique Electrical Safety Approval Number, making it easier for purchasers and installers to identify if a power supply is fully compliant with Australian electrical safety and EMC regulations.

One thing that is important to highlight is that the design of several models of MEAN WELL LED drivers sold in Australia has been modified to ensure compliance with Australian Electrical Safety regulations.

These modified models are not stocked globally, and are only readily available in Australia.

The below images show the different markings on the MEAN WELL PWM-120 LED driver labels.

The top image show the label on the Australian version of the MEAN WELL PWM-120-24-AUP, with the RCM mark circled.

The bottom image shows the label on the standard version of the MEAN WELL PWM-120-24. In place of the RCM mark, you can see the UL marking for North America. This version is not approved for Australia. You must have the RCM mark showing on the label.